Home > Things to Do > Local Foods > Food Tours > Wisconsin's Top Foods: 7 From Around the State

Wisconsin's Top Foods: 7 From Around the State 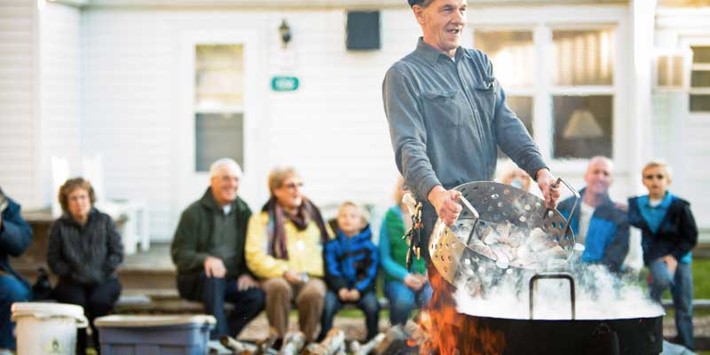 This is all about eating. A road trip to find unique Wisconsin food. From a fish boil along Lake Superior to the food trucks of Madison and the home of malts in Racine.

The only thing more sacred in this part of Wisconsin than the Packers is a good bowl of booyah. To call booyah chicken soup does not do it justice. To randomly call out, "holy moly, that's a really good bowl of booyah," is being polite.

Big pot. Fresh vegetables. Add lots of chicken, but beef and pork are allowed. The key is cooking time. The longer the simmer the better the taste. The best booyah takes a couple of days. Minimum.

Locals know: You'll find the best booyah at any church fundraiser. Or, check out these restaurants in northeastern Wisconsin!

Several areas of Wisconsin claim the fish boil as their own, but Bayfield along Lake Superior has one of the best, held throughout the summer at Greunke's Restaurant.

Whitefish, potatoes, and sometimes onions are dumped into huge kettles of boiling water. As the fish cooks, oils rise to the top, and the cook will throw a bit of kerosene onto the fire to create a dramatic, flaming, boil over.

Add a little lemon, bread, and a piece of pie and we'll nominate you as an honorary Badger.

Locals know: The theatrical boil over is impressive but very hot. Keep the little ones and reckless photographers well back.

The New York Times once referred to the bratwurst as the sausage that made Sheboygan famous.

A "brat" is a seasoned sausage made with beef, pork, or veal. Best on the grill. If you're hungry ask for a double. Two brats, one hard roll. Brown mustard, not yellow. Onions are optional. Ketchup will get you stared at.

Locals Know: The best place to enjoy a brat is any baseball game on a summer evening.

Racine's William Horlick didn't invent a better mousetrap, but he did invent malted milk. Before pasteurization and refrigeration, milk could be a dodgy choice because of the germs.

Horlick's "healthy" recipe of dried milk, malt and wheat became so popular explorers took it to the Antarctic as an emergency food ration. As tasty as Horlick's malted milk was the true genius was adding ice cream. "Malts" – with two straws please – changed the world of first dates forever.

Locals Know: There is no such thing as a bad place to have a good malt. In Racine, try Kewpee's. Any flavor you like as long is its chocolate, vanilla, or strawberry.

Food is one of the best things about Madison, especially served from a cart, and there's even a festival just for food trucks.

Saturdays during warmer months, head for the Dane County Farmers' Market on Capitol Square. There is so much food for sale – not counting the flowers and produce – that it's Impossible to leave hungry.

Wednesday nights in the summer, the carts are out for Concerts on the Square. During the week, lunch on the square or at the Library Mall on the UW campus is food cart heaven.

Locals Know: There are close to 100 food carts in the Madison area. SoHo Gourmet Cuisines is a local favorite. Try the seasoned green beans or macaroni and cheese dumplings.

Unlike the TV commercials where two hearty New Englanders crack jokes in a bog, we know Wisconsin produces more cranberries than any other place in the world. We produce so many cranberries farmers claim they could give a dozen cranberries to every man, woman, and child on the planet.

Warrens is home to the Wisconsin Cranberry Discovery Center, as well as the world's largest cranberry festival. Tens of thousands of tourists head to this small town every year to tour the bogs and eat everything from cranberry ice cream to cranberry mustard to cranberry desserts.

Locals Know: One of the secrets of the fall Warrens Cranberry Festival is a three-mile-long shopping area.

You can't talk about Wisconsin's food history and not bring up beer. Unsurprisingly, the National Brewery Museum is located in southwestern Wisconsin in Potosi. It's also the home of the the Potosi Brewing Company, one of Wisconsin's oldest breweries.

Save time for the Transportation Museum and interpretive center on the grounds, along with the outdoor beer garden.

Locals Know: Traveling the Great River Road to Potosi is a gorgeous drive. We also suspect the bacon popcorn on the menu at the museum cafe is amazing. Let us know if it's as good as it sounds!

Jerry Huffman's first job was as a busboy at a Beloit supper club. His bucket list goal is to try a food from each of Wisconsin's 72 counties. 36 down. 36 to go.

This entry was posted in Food ToursLocal FoodsRestaurants 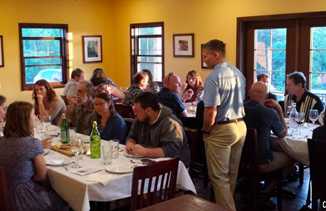 From Farm to Fork: Eating Locally in Madison 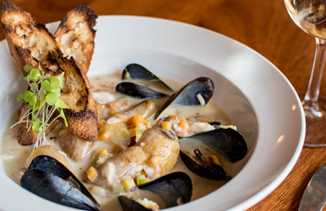 Your Wisconsin Winter is Here
Start Planning
Get Food Tours inspiration in your inbox.
I’m in!
X