This site uses cookies to provide you with the best onsite experience. Read our privacy policy to learn more.
Accept
Home > Things to Do > Arts and Culture > History & Heritage > Badger State: The History Behind Wisconsin's Name 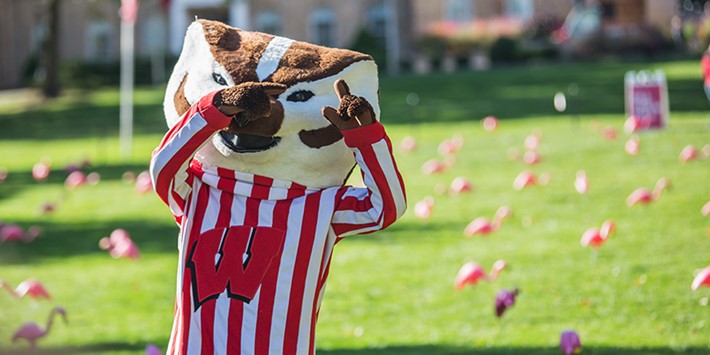 We all know that Wisconsin is the Badger State, and we’re proud of it!

But do you know the history behind the name? Many people think that it comes from an abundance of the black-and-white animal, but in reality Wisconsin has no more badgers than its neighboring states.

The nickname actually dates back to the 1820s, when mining became a huge business, leading thousands of men to the ample iron ore mines in the Midwest.

Wisconsin workers made temporary homes by digging caves into the rock of the mines, similar to tunnels that badgers dig for shelter. The miners came to be known as “badger boys” or “badgers,” and the name eventually came to represent the state itself.

In the 1840s, the badger was steadily becoming a symbol of Wisconsin pride, with people naming newspapers and even steam ships in homage to the up-and-coming nickname.

By the 1880s, the University of Wisconsin-Madison was beginning to use the badger name, leading to the legendary mascot that we now know as Bucky Badger. His predecessor was a real badger, but the cantankerous critter escaped from sideline handlers more than once. The school swapped a small raccoon into its place.

Bucky first appeared as a cartoon figure in some UW publications in 1940, then came to life in 1949 as a paper-mache head worn by a male cheerleader. A naming contest soon followed, and the mascot's official moniker was decided on: Buckingham U. Badger. The costume has evolved since then, becoming the lovable, grinning Bucky we all know and love, but keeping the same Badger pride and spirited nature.

In 1957, badger fever was going strong, and the badger was dubbed the official Wisconsin state animal.

But what happened to the real badger who started it all? He lived out a nice retirement at the Henry Vilas Zoo in Madison, one of only a couple of places in Wisconsin where you can see real badgers in action.

They are difficult to see in nature—wild badgers are nocturnal, and skillfully burrow in underground tunnels called “setts”, allowing them to go long periods of time without emerging.

Your best bet at catching a glimpse of these elusive creatures is to take a visit to the Henry Vilas Zoo (admission is free!) or the Milwaukee County Zoo near downtown Milwaukee, one of the top zoos in the nation.

Both have cool badger habitats that let you see this critter's interesting digging habits and catch a rare peek at a real-life Bucky—don’t miss out!