This site uses cookies to provide you with the best onsite experience. Read our privacy policy to learn more.
Accept
Home > Things to Do > Eight Historic Bowling Alleys 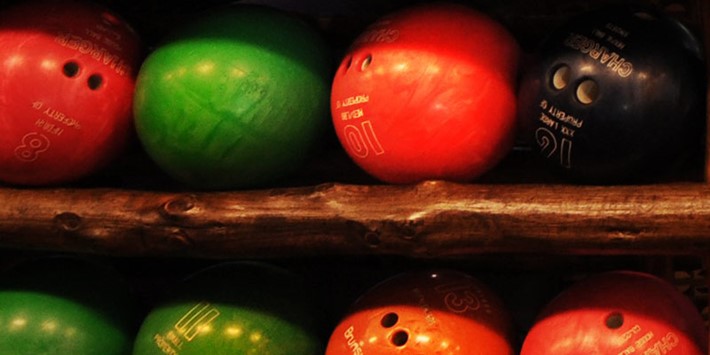 There’s nothing better than bowling… unless it’s bowling and beer. The best of both is right here: Wisconsin has more small, old-fashioned lanes than any other state in the union – the no-frills kind where you roll a rumbling strike down wood lanes, mark your own scores and watch your ball speed back toward you on the above-ground return.

You can’t describe owner Marcy Skowrinski without using the word “feisty.” This tiny 87-year-old gal is reason enough to visit, even if you don’t care about the 105-year-old pair of alleys downstairs. She’ll tell you about the time her father-in-law hid the booze underneath the crib during a Prohibition raid, “because the Feds wouldn’t touch a baby!” Then she’ll grin and pull out a dictionary of Polish slang – the pages with “dirty” words are marked for easy access. Marcy likes things the way they are in her establishment. “We don’t have pool tables, we don’t have gambling machines! I want people to talk to me,” she says. Call ahead – she’ll find a neighborhood kid to set pins for you.

Built in 1927 as part of the Oriental Theater & Bensinger’s Recreation, it’s an underground sports arena: three bars, 16 bowling lanes, nine pool tables, darts, foosball, a 30-game arcade and an electronic dance machine so you can get your groove on. “It took a lot of time to clean this place up,” says owner Slava Tuzhilkov, “but I saved the old atmosphere.” Over the years, the likes of Gloria Steinem and Ringo Starr have visited. Can you imagine bowling with them?

The great thing about The 10th Frame - besides bowling - is the food. Try Ma’s Famous Friday Fish Fry or the 10th Frame Double, a 1/3-pound brat patty with cheese. Chad Van Daalwyk bought the 70-year-old lanes in 2002. “I actually worked and bowled here when I was a kid,” he says. “The Hahns (original owners) were like grandparents to me.” Van Daalwyk and his family have made the business thrive - after 13 lenders turned him down for financing. “No one wanted to give a 26-year-old a loan,” he recalls.

“Mom and Dad started here in 1950,” says Sharon, one of the owners. “Back then it was the Sister Bay Hotel: a lodge, bar and dance hall.” In 1958, they turned the dance hall into a 6-lane bowling alley. The original menu from the 1960s is displayed on the wall - T-bone dinners could be had for a mere $3.75. These days, they pack ‘em in for the Friday night perch dinner.

Here you’ll find a classic set of four lanes. The same family has owned the bowling center for some 30 years. They bought the bank building next door too, turning it into a lounge – you can see the old bank vault door. Don’t miss the photo-op down the street; you can pose for a picture with an 8-foot-tall Ice Man named “Ugh.” For real.

Built in 1947, this roadhouse-style bowling alley is rumored to be haunted - liquor bottles rearrange themselves, doors slam - although the current owners haven’t experienced any chills since they purchased the property a year ago. “We haven’t seen any evidence of that,” says Dorie, who co-owns the place with her sister, Darlene. There are four lanes, a huge horseshoe-shaped bar, and a nice dining area. They also have a car show and corn roast every August.

The really great thing about Anglers is that folks can sit and have a drink at the bar, and their kids can bowl right in the next room. Everybody’s happy! The four lanes are as old-fashioned as they come and the lodge-like atmosphere in the attached bar/restaurant is charming, especially if you enjoy multiple taxidermy trophies.

Here’s a funky, happening place, starting with the carpeted walls adorned with florescent balls and pins. Owner Tim Vasatka has ramped up the business: he’s added a poker room, horseshoe pits and a volleyball court. He’s even bought the nearby Webster Motel, where there’s a free drink chip in every room.

Manya Kaczkowski is a freelance travel, food and lifestyle writer from Menomonee Falls. Her book, Milwaukee’s Historic Bowling Alleys, was published in 2010. Content produced in cooperation with Wisconsin Trails, www.wisconsintrails.com.

This entry was posted in Things to DoEntertainment and AttractionsSportsSports Facilities