This site uses cookies to provide you with the best onsite experience. Read our privacy policy to learn more.
Accept
Home > Things to Do > Entertainment and Attractions > Tours > The Wright Place - A Trip to Taliesin

The Wright Place - A Trip to Taliesin 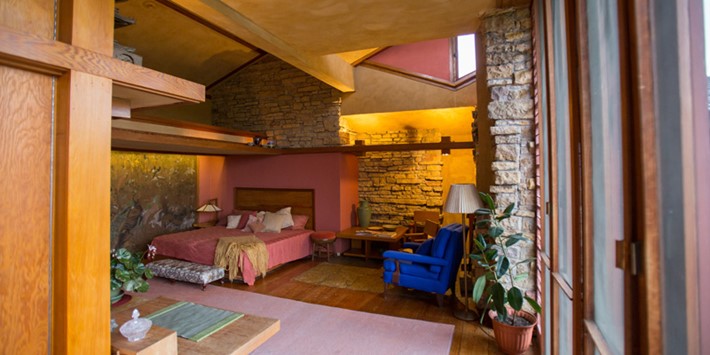 When you round the bend on Highway 23 after crossing the Wisconsin River near Spring Green, Taliesin East emerges from behind a hillside in the Wyoming Valley, described as one of the greatest landscapes in America. This signature work of wood and stone from one of America’s greatest architects, Frank Lloyd Wright, is dramatic yet subdued, awe-inspiring yet perplexing. It’s a study in perfect harmony and contrast.

As you walk through the home, gardens, studio, grounds, and school on the four-hour estate tour, you can imagine an inspired Wright at work and at rest here on his 600-acre estate, among his beautiful objets d’art, which include Asian prints, Native American artifacts, Mission-style furniture, and pottery. Earth-inspired colors and natural textures weave harmoniously together, the horizontal and the vertical are perfectly juxtaposed in furniture and architectural elements, and structure and function, both man-made and natural, flow as one. Inside and out, light and vantage are awe-inspiring from every angle and around every corner, stone wall, and terrace.

Wright’s magnum opus was nearly 50 years in the making, and remained throughout his life a work-in-progress, a structural and environmental canvas where his ideas were formed and tried. The estate includes the residence, Hillside Home School, Midway Farm, Tan-y-deri House, and the Romeo and Juliet Windmill, as well as the landscapes and vistas sculpted by Wright.

The name Taliesin means “shining brow” in Welsh, the ancestry of Wright’s grandparents, who settled in the lush valley that reminded them of home and where a young Frank spent his formative years. Today Taliesin is still a canvas for Wright’s disciples and students of the summer residential architectural school he founded in 1932. Taliesin is real “living history” – you might catch someone ringing a large bell during a tour, calling the architectural fellows to tea. In those moments, it’s not difficult to picture Wright’s usual morning assembly under the bygone oak and among the patterns of limestone, where he preached to his followers.

Like its creator, Taliesin has weathered its share of tragedies. In recent years, thunderstorms threatened the home’s foundation, causing a devastating mudslide and felling the 225-year-old Tea Circle oak tree onto the roof. Since Wright’s death in 1959, preservation has been an ongoing challenge. Named a National Historic Landmark in 1976 and more recently listed as a top endangered property, Taliesin received a $1.1 million “Save America’s Treasures” grant in 1999 to help bolster preservation and renovation efforts by Taliesin Preservation Inc., which manages the museum and oversees restoration.

Visitors will see renewal in progress throughout the estate. Buses painted red – Wright’s favorite color – depart from the nearby visitor center on a variety of tours, suitable for both Wright-o-philes and casual tourists. Recent improvements include re-roofing and stabilization as well as development of master renovation and landscape restoration plans.

Wright’s own story could be a blockbuster on the silver screen. Born in Richland Center in 1867, Wright was a brilliant visionary who studied engineering at UW-Madison and later worked for the firm of architect Louis Sullivan in Chicago. In Oak Park, Ill., Wright married, started a family, and created an international stir as the father of “organic” architecture, or the prairie school, which extols harmony with the natural milieu through use of materials, flowing horizontal lines, and other design principles found in nature.

Wright installed his mistress at Taliesin, which he began building in 1909. Tragically, a deranged employee set fire to the house and murdered Wright’s lover, her children, and four others. Wright rebuilt his beloved estate and married anew. Fire struck Taliesin again, and Wright rebuilt; the incarnation that remains is known as Taliesin III.

Despite a professional dry spell during the Great Depression, Wright wrote an autobiography and a controversial classic on urbanism, The Disappearing City. After falling from popular favor, Wright enjoyed a renaissance – he was featured on the cover of Time magazine in 1938 – with works like Fallingwater in Pennsylvania, the S.C. Johnson Wax building in Racine, his winter residence at Taliesin West in Arizona, and the Guggenheim Museum in New York.

A not-to-miss late-in-life project, now on display in the school at Taliesin, is the model of Wright’s Broadacre City plan, which shows Usonian houses on one-acre plots surrounded by clusters of community, commercial, and industrial spaces. Although this particular project was never built, Wright’s vision continues into the present, both at Taliesin and through the work of the Frank Lloyd Wright School of Architecture, founded by Wright in 1932, which holds summer classes on the Wisconsin estate and carries the master’s vision into the 21st century.

While Frank Lloyd Wright’s designs can be found throughout the world, much of his life’s work is in southeastern Wisconsin. Tours of Taliesin are offered from May through October, and include a one-hour hillside tour, two-hour house tour, two-hour highlights tour, and four-hour estate tour. Shuttle and walking tours are also available through the visitor center in April and November. For information and tour reservations call (877) 588-7900.

Visitors to the Spring Green area can take a self-guided driving tour among more than 20 Wright-designed or Wright-influenced structures in the region:

The Unity Chapel - one of the earliest building associated with Wright, was designed by architect J. L. Silsbee; young Frank, as an apprentice, is said to have designed the interior of the 1886 church.

Wyoming Valley Grammar School - built in 1956 as a memorial to Wright’s mother.

Looking for a place to stay? Browse our directory, or check out these accomodations with ties to Frank Lloyd Wright!

This entry was posted in ToursArchitectureHistory & Heritage