This site uses cookies to provide you with the best onsite experience. Read our privacy policy to learn more.
Accept
Home > Things to Do > Arts and Culture > History & Heritage > 7 Man-Made Wonders of East Central Wisconsin 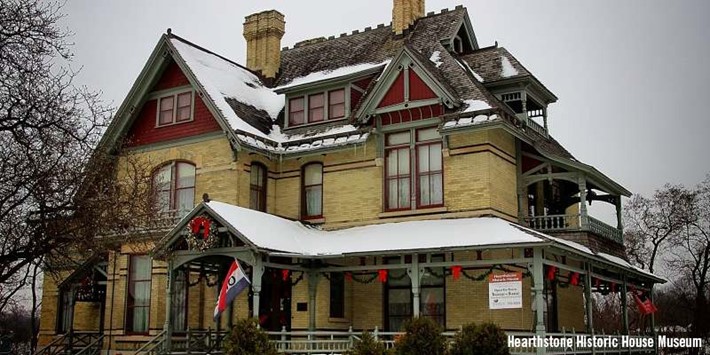 The east central region of Wisconsin comprised of only six counties, but the historical and artistic significance found in this small area is evident when reviewing the man-made wonders that call this region home.

With the area's location on the Fox River waterway and shores of Lake Winnebago and Lake Michigan, transportation was integral to the east central region's development, which created a culture of progress.

Here are seven man-made novelties that are open year-round and explore the area’s historic beginnings and artistic future.

Launched in 1943, the USS Cobia is a World War II submarine that was involved with sinking numerous enemy vessels. Now moored along the Manitowoc River as part of an exhibit at the Wisconsin Maritime Museum, the USS Cobia is a National Historic Landmark, and after decades of service to the military, it was retired and restored to its 1945 configuration.

Visitors can tour her topside and go inside to see torpedo rooms, crew’s quarters and engine rooms. Take a walk through this historic man-man wonder and envision the lives of the brave service members who fought battles beneath the sea to protect our country.

On September 30, 1882, this grand home located along a bluff overlooking the Fox River became the first house in the world to be lit by a hydroelectric station. The mansion’s rare, original Thomas Edison light switches and electroliers are still operational.

Now a museum, the beautiful house showcases the work of Thomas Edison and features vintage furnishings from the late 1800s. Guided tours are available and an operating model of the hydroelectric station is available in the basement for hands-on education.

Designed in the 1920s, The Paine Center is a stunning mansion with a unique history in central Oshkosh. The couple who designed and furnished it never actually lived in this elegant home, and the property sat empty until the 1940s when it was established as a museum.

The estate offers changing exhibits and programs that focus on architecture, art and horticulture with the aim to educate and inspire. There is even a hands-on family center in the lower level that hosts programs for kids of all ages.

Recognized as the City of Sculpture, Waupun has one of the highest concentrations of public art per capita in the United States, and it’s in large part because of inventor and artist Clarence Shaler. Born and raised in the area during the late 1800s, he donated several pieces of stunning bronze sculptures to the city he loved.

The first sculpture was one he commissioned James Earl Fraser to create as a tribute to Native Americans. Located in Shaler Park, “The End of the Trail” is a bronze statue representing the plight of Native Americans and is on the National Register of Historic Places.

Shaler eventually became a sculptor himself and donated six of his own creations to the city in addition to commissioning two more. This incredible collection is located throughout the city and neighboring areas, and blue signs help point visitors to their locations. Tour the area to envision the beauty of pioneers and Native Americans as Shaler saw them.

Located halfway between Sheboygan and Fond du Lac, this historic site was once a stagecoach inn with a neighboring sawmill and blacksmith shop offering respite along a popular trade route. After the completion of a railroad several miles north in the 1860s, the booming businesses became obsolete.

With the site now maintained by the Wisconsin Historical Society, visitors can explore the restored property and envision what life was like during a bygone era. During the warmer months the historic buildings are open for guided tours and hands-on demonstrations, while during the winter season there are regularly scheduled sleigh ride weekends and Hearthside Dinner events in which guests work together to prepare a midday meal for weary travelers.

Also available on-site is Wisconsin’s largest collection of carriages, sleighs and wagons at the Wesley W. Jung Carriage Museum, which is open year-round.

A world-renowned collection of glass began with the admiration of a paperweight. Evangeline Bergstrom started collecting glass paperweights in 1935 when she visited an antique shop and found a Baccarat weight from 1847 that reminded her of her beloved grandmother’s.

Since then, the collection grew to more than 200 ,and they have a permanent home in her former mansion overlooking Lake Winnebago. The home was donated to serve as the site for the glass museum which now houses four different glass exhibits, including the impressive collection of antique and contemporary paperweights, a collection of Germanic drinking steins that date back to 1573, a collection of Victorian glass baskets, and the continually growing collection of contemporary glass art.

The museum has free admission and in addition to the expansive collections also has temporary exhibits and hands-on studio classes.

While the EAA Aviation Museum is most widely recognized for its weeklong fly-in convention held every summer, the museum also is home to an extensive collection of historic aviation equipment open year-round.

With more than 200 airplanes, galleries and displays, the museum showcases the pioneers of flight dating back to the Wright Brothers. These displays include antique airplanes, innovative inventions, aerobatic planes, World War II aircraft and artifacts, and a replica of SpaceShipOne.

Tour the hangars and explore the man-made wonders that took us to the skies and shaped the way we see the world.