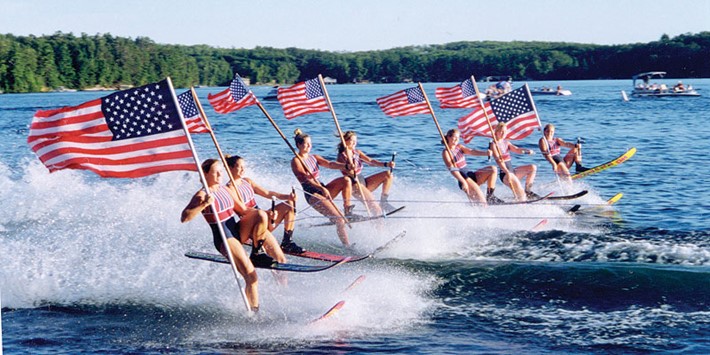 Do you know who owns the title “Show Ski Capital of the World”? Wisconsin, of course! With more water ski show teams than any other place in the world you’ll find plenty of action staged on our fun-filled lakes. Teams all around the state soak up every last drop of summer performing water ski shows for their communities.

Amateur skiers ranging in age from young children through retired adults adorned in flashy costumes dazzle audiences with their effortless shows of unique and creative feats that would be hard to perform on land, much less while skimming across the water. Human pyramids, barefoot skiing, jumpers performing tricks as they go over a ramp, and girls doing a “ballet” act involving dancing while part of a line that travels in a large circle are a few of the acts packed into an action-filled water ski show.

The Wisconsin State Water Ski Show Championships, which is the largest water ski tournament in the world, is held in Wisconsin Rapids each summer. Many of the top water ski show teams in the nation and in the world call Wisconsin home. With most of the teams performing free shows on a weekly basis, Wisconsin offers world-class water ski entertainment featuring some of the world’s most talented skiers.

With almost 30 teams all over the state of Wisconsin, wherever you vacation, you are sure to find a water ski show nearby. Here are just a few of the teams you can find around the state:

Holding world records for many different ways to put more talented amateur skiers all out behind one boat at the same time (including a 21 person barefoot line and a 44-person pyramid) in a tournament, as well as the first amateur team to build a 5-level pyramid, the Rock Aqua Jays put on an unbelievable show at Traxler Park in Janesville all summer long. With 17 national titles as well as 14 Wisconsin state championship titles, the Rock Aqua Jays Waterski Team is one of the most successful and talented amateur teams in the world.

Located just over the Wisconsin-Illinois border in Twin Lakes, Aquanut Watershows have been performing for over 40 years. They currently hold the world record for their 30-girl ballet line, set in 2012.

The Chetek Hydroflites have been performing for audiences in northwestern Wisconsin and instructing area youth on the sport of waterskiing for over 20 years. Catch their free shows on Lake Chetek Thursdays and Sundays all summer long.

One of the oldest water ski show clubs still in existence today, the Min-Aqua Bats put on a great show for Northwoods visitors all summer long. Check out one of their shows performed on Sunday, Wednesday and Friday nights.

Visitors to the Green Bay or Fox Valley areas can catch a show by the Waterboard Warriors performed on the Fox River. Shows are free and run from Memorial Day to Labor Day on Tuesday and Thursday evenings.

This entry was posted in Water Skiing