This site uses cookies to provide you with the best onsite experience. Read our privacy policy to learn more.
Accept
Home > Things to Do > Local Foods > Breweries > 6 Can't-Miss Things To Do in Milwaukee 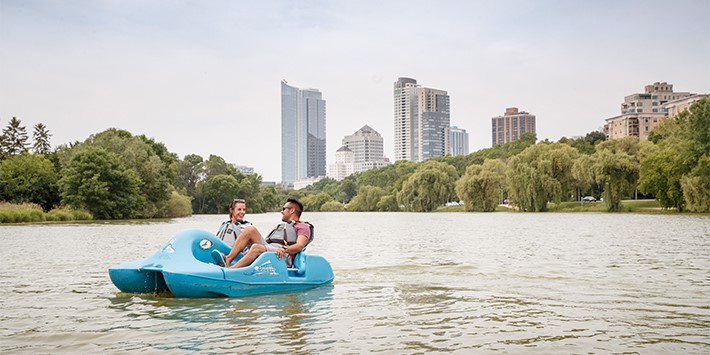 Milwaukee is a city on a Great Lake, home to high-caliber professional sports teams, and a place to kick back and drink craft beer while listening to live music.

Recently, the Wall Street Journal named Milwaukee one of 10 places to travel in 2020 and highlighted the city's five James Beard Award semifinalists, the Milwaukee Symphony Orchestra’s new concert hall and the reopening of the renovated America’s Black Holocaust Museum, among other offerings.

If you've never been to Milwaukee before, here are some more can’t-miss activities and events in Brew City!

Milwaukee is located on the shores of Lake Michigan, one of the Great Lakes. This provides plenty of space for outdoor summer activities, from sailing and swimming to beach volleyball at Bradford Beach near downtown.

If you just want a taste of the lake, stroll through the loop inside Lakeshore State Park. Admission to this park is free and visitors can run, bike or stroll on in and enjoy the breeze off the lake and views of downtown and the nearby Milwaukee Art Museum, which features dramatic Santiago Calatrava-designed architecture.

Driving into downtown from the west, you’ll notice the City Lights Brewery building overlooking the city. As the name suggests, this historic building once supplied the power to light the city, and today people can tour the building and see the classic design by Alexander Eschweiler, steel exported by Andrew Carnegie and brickwork hand-glazed by Tiffany. That’s just one of the many opportunities to tour and taste breweries in Milwaukee, from up-and-coming craft brewers and classics like Miller Brewing, Milwaukee Brewing Company, Sprecher Brewery and more.

This 11-day festival headlines the peak summer season in Milwaukee, from late June to early July. Known as “The World’s Largest Music Festival.” Summerfest features multiple stages and hundreds of acts, from indie to hip hop to classic rock and beyond. Headliners have included the likes of Thomas Rhett, Paul McCartney, The Killers and more.

The NBA MVP Giannis Antetokounmpo has reinvigorated the Milwaukee Bucks franchise and fan base, and in turn the team has helped spark new life in the entire region. The Bucks play at the Fiserv Forum, a new downtown arena surrounded by restaurants and brew pubs in an area called The Deer District. Popular destinations include Good City Brewing for craft beer and burgers and Punch Bowl Social for food and games.

The city’s major league baseball team is located just west of downtown. Tailgating is popular in the parking lot and you’ll spot fans grilling brats and hot dogs before a game. If you want a breather from the crowd, take a short walk along the nearby Menomonee River on the Hank Aaron State Trail, named for the famed slugger who played for the Milwaukee Braves.

If you want a broad taste of Milwaukee’s local food heritage and contemporary flavors, Milwaukee Food Tours offer walking tours for groups. Tours explore neighborhoods originally settled by Italian, Irish, Polish and German immigrants and point out architectural highlights and cultural touchpoints while sampling flavors from restaurants along the way.

For more to see and do in Milwaukee, check out these waterfront hotspots and ways to explore the outdoors while downtown!