This site uses cookies to provide you with the best onsite experience. Read our privacy policy to learn more.
Accept
Home > Things to Do > Food and Drink > Breweries > Get to Know Brew City at These 5 Milwaukee Breweries 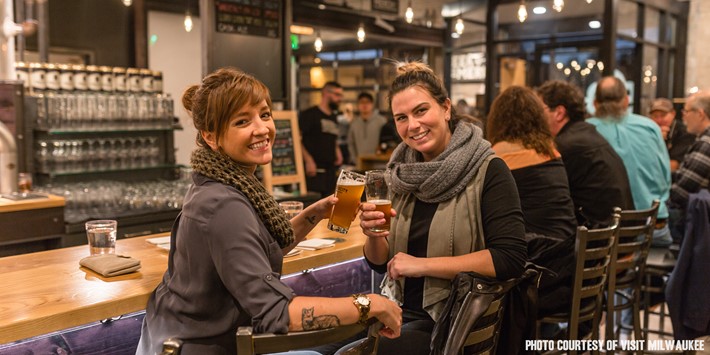 Brew City is back. Breweries are both the history and future of Milwaukee, with Miller still carrying the torch of Frederick Miller and upstarts like Good City Brewing bringing a new craft flavor to the community. We’ve highlighted a few local breweries that deserve to be included during your next visit to Milwaukee.

City Lights Brewing embodies the transformation of Milwaukee’s spaces and evolving economy. In 2014, Robin Gohsman scoped out a building that was home to the Milwaukee Gas Light Co. more than a century ago and once lit city street lamps. Gohsman had a vision for a brewery in the long-abandoned building, and set to work repurposing the architecture into a gorgeous new indoor and outdoor space.

Beer: Just like the building, the beer is about classics, including amber ale, pale ale and IPA. A hazy IPA won a medal at the Great American Beer Festival.

Named for the co-owners’ vision of Milwaukee, Good City Brewing first invested in a vacant building on the city’s East Side and opened the brewery. Soon after that, they expanded to open a huge establishment in the Deer District across from the Fiserv Forum.

Beer: Good City called their first beer Risk IPA, which represented the chance they were taking on the brewery and on the city of Milwaukee. It paid off. Their follow up beer was a double IPA called The Reward.

Gathering Place Brewing in the Riverwest neighborhood pays homage to gemütlichkeit, the German sense of conviviality that serves as Milwaukee’s unofficial motto. From its name to its mission to donate to nonprofit organizations, Gathering Place is rooted in a sense of community.

The dynamic tour from one of the beers that made Milwaukee famous shows both the modern-day scale of operations as well as the humble origins of Frederick Miller. As one of the world's largest beer producers, Miller played a major role in establishing Milwaukee as the "Beer Capital of the World" in the 19th century, and a highlight of the tour is seeing the original beer caves from back in the day, as well as the hologram of the founder himself.

Beer: Send a postcard to anywhere in the world for free while you taste fresh Miller High Life straight from the tank.

Milwaukee Brewing Co. has matured along with the craft beer market. Jim McCabe opened his Ale House in 1997, back when he had to explain styles to a town used to Pabst Blue Ribbon. When McCabe scouted new properties to add to locations in the Third Ward and Walker’s Point, he found the right spot in the former Pabst complex. The Pabst building made sense historically and economically with access to the freeway for distribution, continued downtown development and proximity to the new Milwaukee Bucks entertainment complex.

Beer: Palates have caught up to the complex flavors of craft beer, and the brewery’s signature Louie’s Demise ale has remained the same recipe that McCabe home-brewed in the 1990s.

Need a bite to eat with that drink? Try out one of these 8 Milwaukee Spots for Incredible Pizza!