This site uses cookies to provide you with the best onsite experience. Read our privacy policy to learn more.
Accept
Home > Dining > Restaurants > Not Just One Kind of Fish at a Wisconsin Fish Fry 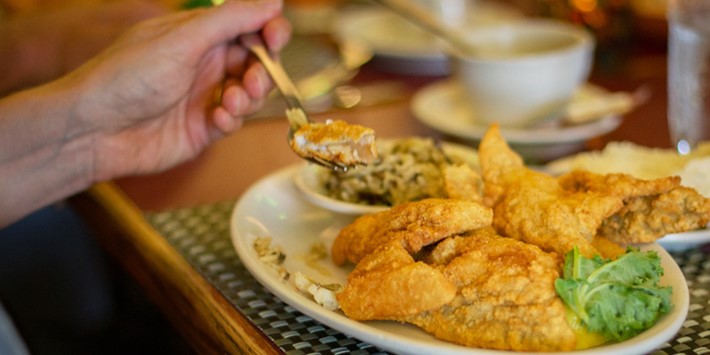 Fish frys are to Wisconsin as bagels and lox are to New York City, deep-dish pizza is to Chicago and fish tacos are to San Diego.

But there is no one type of fish used for a traditional Friday night outing in the Badger State, thanks to the abundance of our lakes and streams.

Fish frys are a part of Wisconsin’s DNA because of the large number of Catholics who came from Germany and eastern Europe. For religious reasons, eating meat on Fridays was banned, so fish - pretty much whatever was available - took its place.

Most Wisconsin restaurants, supper clubs and bars serve several types of deep-fried fish ranging from walleye to bluegill to perch to whitefish to cod to haddock to smelt to even catfish on Friday nights. And many eateries, also serve fish baked or even grilled.

Here’s the word from five popular Wisconsin restaurants on the fish they serve on Fridays - and often the rest of the week too!

Co-owner Tom Plummer goes with the popular walleye, which he deep fries after breading by hand. The fish is light and flaky and slightly spicy because of what he calls the “secret” batter. The taste of the fish is somewhat sweet, which Plummer says keeps customers asking for more. He serves it at his pub - which has an 80’s vibe - with fries, coleslaw and bread.

Haddock is the fish of choice at this Lake Geneva icon, a geodesic dome that looks like an igloo. Haddock is a cold-water Icelandic, deep-sea dweller that’s light, flaky and has the medium texture of a steak with no off-taste at all, says owner Jeanette Maxwell. She uses her own flour and seasonings before frying it in peanut oil. It is served with potato pancakes, a chunky applesauce and her own house-made coleslaw with Italian rye bread and tartar sauce.

Never miss one of our delectable articles!

This deep-fried cod served at popular Stevens Point hangout has been voted best in Portage County several times, says bar manager Luke Andersen. Cod has a mild flavor, large white flakes, has a consistent quality and is sometimes called the “chicken of the sea.” Better yet, it doesn’t harbor grease so it doesn’t taste oily. At Hilltop, it’s prepared with a beer batter that includes suds from the Stevens Point Brewery and served with potato, coleslaw, rye bread and tartar sauce.

The fish of choice here is whitefish, which is harvested in Lake Superior, just a stone’s throw from the restaurant’s front door. Family spokesman Jared Johnson says the whitefish could hardly be fresher, which increases its quality greatly and adds to its lightness, flaky texture and sweetness. The fish is deep-fried in an egg wash dipped into a batter, though it can also be served grilled, broiled or blackened. It comes with potato, fries, soup and salad. At the end of the whitefish season, the inn switches to herring, which he said tastes a lot like whitefish.

Owner Nicholas Zabel serves cod, perch, walleye and bluegill for his Friday night fish frys. But for something a bit different and arguably healthier, he recommends the wild-caught salmon that comes from Dutch Harbor, Alaska. It’s so good, he says, you could eat it raw. He does not deep fry it, preferring to grill it medium rare and serve it with a dill sauce over basmati rice. It melts in your mouth, he says. He’s more than happy to also serve deep-fried walleye, if that’s what customers want.

For more delectable fish fry, come fry with me or have a look through our directory.