This site uses cookies to provide you with the best onsite experience. Read our privacy policy to learn more.
Accept
Home > Things to Do > 16 Haunted Houses Throughout Wisconsin 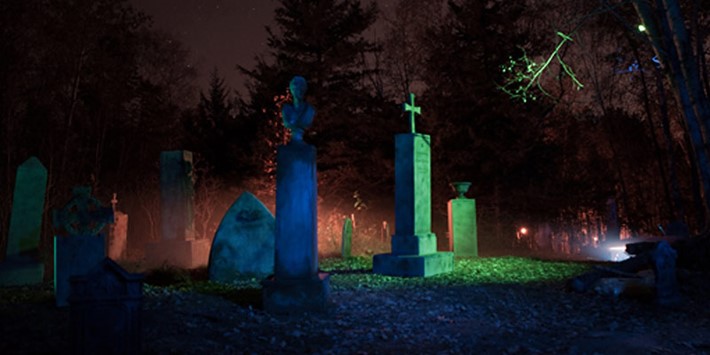 It grows dark, the smells of freshly harvested crops and warm spiced apple cider begin to fade. The leaves crunching under foot as each step is taken towards the house, but what's that sound? A snapping stick in the distance, is there something moving in the woods? As Halloween gets closer, you may find yourself looking for some great spooky places to visit. Wisconsin is full of interesting and fun places to check out when it comes to good haunts. There are several haunted houses, mazes and hayrides throughout the state, as well as rumored haunted lighthouses, hotels, restaurants and other spooky locations.

No hayrides. No escape. No mercy. Dreadwood is an isolated, undeveloped forest in Hudson, WI. It is not a park surrounded by neighborhoods or filled with cabins. You should expect to walk a half mile on a dirt path, so dress warmly and with comfortable shoes. There will be no turning back, no side-doors or escape routes — once you have entered Dreadwood, the only way out is through.

Terror on the Fox - Green Bay

Ranked as one of the top ten Halloween attractions in the country, by HauntWorld Magazine, this terror-rific event is something even the undead can’t pass up. Terror on the Fox boasts one of the largest and most horrific haunted houses in the Midwest, with gruesome scenes, freakish creatures, and shear fright lurking around every corner. Meander through the dark passages and narrow halls, and hopefully make it out in-tact.

Your fears become reality on this walk through the haunted woods of central Wisconsin. Spooks wait around every corner of the half-mile trail, a creepy course that’s three times as long as the average haunted house. This terrifying trek is not for the faint of heart, and the trail is not recommended for children under age 13.

Wisconsin Fear Grounds consists of three haunted houses in one location. The terror started with the original haunted house, “Morgan Manor" and now includes two additional haunted attractions including “Torment”and “Shadowlands." The more than 30,000 square feet of Terror has been rated as one of America's Best Haunts by numerous publications and it won't disappoint.

This entry was posted in Things to DoEntertainment and AttractionsTours