This site uses cookies to provide you with the best onsite experience. Read our privacy policy to learn more.
Accept
Home > Things to Do > Entertainment and Attractions > Tours > Step Into a Hallmark Movie in These Small Wisconsin Towns 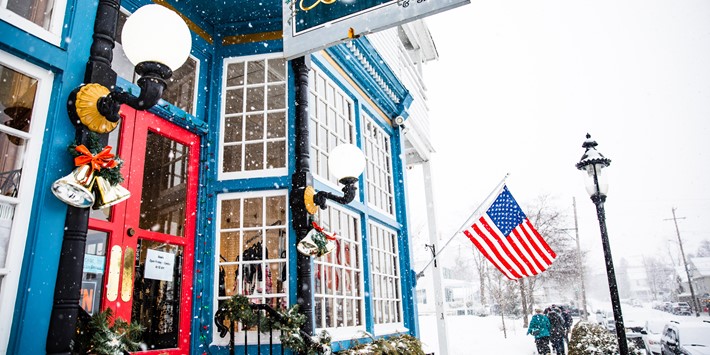 When the temperatures plunge and the snow begins to fall, it's time to cozy up and watch a Hallmark movie. Or, better yet, make plans to explore one of Wisconsin's own charming towns in person. Here are four that are worthy of being the setting for one of those popular holiday films.

One of America's best small towns according to Smithsonian Magazine, Baraboo boasts a picturesque downtown that's listed on the National Register of Historic Places. Tucked among its majestic old buildings is Circus World, a museum and entertainment venue that tells the story of The Ringling Bros. Circus, which wintered in Baraboo for 34 years.

The city excels at preserving its historic glamour while incorporating chic new shops, restaurants and inns, such as Devil's Lake Lavender, which offers a lavender-themed spa, café and farm stay. Make sure to sample some spirits and wine at Driftless Glen Distillery and Baraboo Bluff Winery. And get your nature fix by walking along the Baraboo segment of the Ice Age Trail. Four miles of this 1,150-mile path wind through town, leading you through four parks, a conservancy and along the Baraboo River.

It's hard to top Cedarburg when it comes to Old World charm. Its downtown, on the National Register of Historic Places, is filled with cream-colored limestone buildings dating to the early 20th century. Many of these buildings are home to boutiques selling everything from handmade pottery to Nepalese hoodies, or quaint bed-and-breakfast inns.

A stop at Cedar Creek Settlement is a must. The restored 19th-century woolen mill contains additional shops, plus artist studios, a winery and a working forge. Adding to the magic, shimmering Cedar Creek winds through town and flows under Wisconsin's only remaining covered bridge. Before leaving town, head over and stroll through this romantic reminder of simpler times.

All of the towns dotting the Door County peninsula could be the setting for a Hallmark special, as they're home to dramatic lake views, thick forestland, quaint cottages and stately inns. But Fish Creek manages to stand out among the rest.

The town offers expansive views of Green Bay from its harbor. A booming arts community lives here, offering galleries and studios, live performances and make-your-own-art shops. And the main entrance to popular Peninsula State Park sits on the town's east end. Head to the park to hike, bike, cross-country ski, sled or snowshoe. Or take a tour of historic Eagle Bluff Lighthouse, tucked inside the park. Make sure to check out the scenic overlooks for a peek at the nearby islands, then return at dusk to drink in a dramatic sunset.

One of Wisconsin's first cities, Mineral Point was settled in the 1830s by immigrants from Cornwall, England, who came to work in its zinc and lead mines. Thanks to early 20th-century preservationists, quite a few of the stone homes and buildings they created remain, evoking the feeling of strolling through a European village.

Today, many of these structures contain the studios and galleries of artists and craftspeople. Think potters, painters and glassblowers. Stop in to check out their wares, then have a meal at one of the many restaurants serving Cornish food, including the pasties favored by the miners. Stay overnight at one of the city's inns – perhaps the three-story Commerce Street Brewery and Hotel, a pub with five posh rooms upstairs. Before heading home, explore the surrounding Driftless Area, a beautiful, hilly region offering endless recreational opportunities.

Keep on exploring in these seven charming small towns!