This is the drumlin end of the Glacial Drumlin Trail. Here it winds among teardrop-shaped hills that were formed under the great continental ice sheet. Streams and rivers poke their way around the hills as well. The trail crosses the meandering Koshkonong Creek five times. The larger Crawfish and Rock Rivers are crossed on impressive, stressed iron bridges, and the views from the Rock Lake causeway are wonderful.Just two miles north of the trail along the Crawfish is Aztalan State Park, once the site of a fortified Native American town that flourished for hundreds of years, but was abandoned by the time of Columbus. It was tied to the Middle Mississipian Culture, a vast trading network of settlements radiating from its namesake river. Pyramid-shaped ceremonial mounds similar to those at Aztalan were a hallmark. Between London and Lake Mills you may spot another sign of the past - a herd of buffalo grazing north of the trails. Deerfield has the most accessible downtown along the trail. The attractive town centers of Lake Mills and Cambridge are a bit off-trail, but well worth a visit. 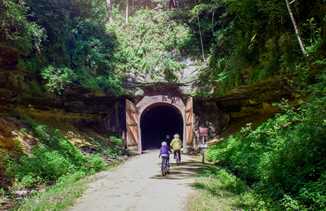