This site uses cookies to provide you with the best onsite experience. Read our privacy policy to learn more.
Accept
Home > Things to Do > Arts and Culture > Architecture > 7 Historic Wisconsin Mills Perfect for Fall Pictures 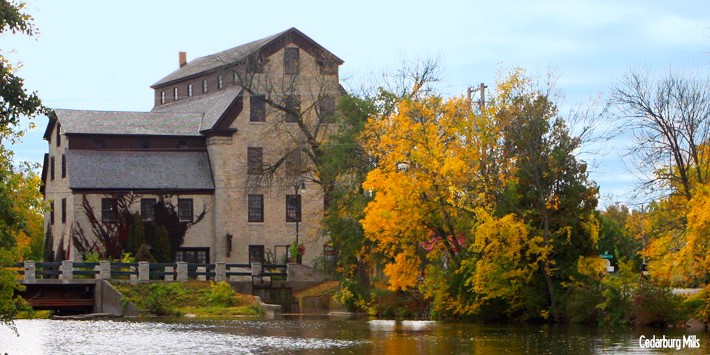 Looking for that perfect fall shot? It’s hard to beat a historic mill by a rushing stream on an idyllic autumn day, where the weathered walls and stonework, waterwheel and mill pond are highlighted by bright fall colors.

Wisconsin’s mills, in their heyday, were places to gather and mingle with neighbors, so stay a while and see what discoveries await in nearby parks, towns and shops. Here are a few Wisconsin mills to get you started.

Beckman Mill is located in Beckman Mill County Park. Built in 1868, the grist mill operated into the 1920s.

Today the restored site includes the mill, pond, dam, footbridge along with historic displays, a blacksmith shop, visitor center and gift shop. The park also has a nature trail.

The Messer/Mayer Sawmill was built in 1856 to cut local timber and was expanded in 1871 when a grist mill was added, which operated until 1954.

Today the mill, with all its original equipment, is part of Richfield Historical Park. Other highlights include historic homes, a sugar shack and hiking trails.

Herrling Sawmill operated from 1854 to 1910 and processed lumber for the area.

Part of the historic Wade House property, the mill was rebuilt in 2001 on its original site. Costumed mill workers provide live demonstrations of how the mill worked, including its vertical "muley saw.”

This sawmill was built in 1847 along Devils River and was later converted to a grist mill, processing grain from the nearby German, Czech, and Irish immigrant farming settlements. The mill produced bags of wheat, rye, and graham flour and animal feed.

After operating for nearly a century, the mill closed down in 1934.

Red Mill is located near Waupaca, along the Crystal River. The grist mill was built in 1855 to process crops from area farmers. Separate operations were set up for flour grinding and livestock feed grinding.

The mill, which operated for more than 100 years, was closed in 1959 and now houses a wedding chapel and a shop for gifts, ice cream and coffee.

This historic mill was built in 1850, and features a rare wooden water wheel. While no longer operational, the mill is a favorite among photographers for its tranquil forest setting, showcasing the beauty of rural Wisconsin in all seasons.

In the area around the mill you’ll find artifacts and landmarks from when the mill was functional, including millstones, the Old Mill House, and the Hyde Chapel. Return to the mill at night to see it against a new backdrop – a spectacular sky of stars. The mill is located under some of the darkest skies in Wisconsin, and on a clear night, the view is (truly) out of this world.

Cedarburg was home to several thriving mills in the mid to late nineteenth century. The first, Cedarburg Mill, was built in 1855. The main part of the building was five stories high. Other mills were soon built along Cedar Creek, including the Grafton Woolen Mill, which was later incorporated as Cedarburg Woolen Mill. At the height of its success in 1893, it was the largest woolen mill west of Philadelphia.

Today these magnificent stone structures in Cedarburg are occupied by shops, studios, galleries, restaurants and a winery, while the woolen mill still operates and houses a museum.

This entry was posted in ArchitectureMuseums & History