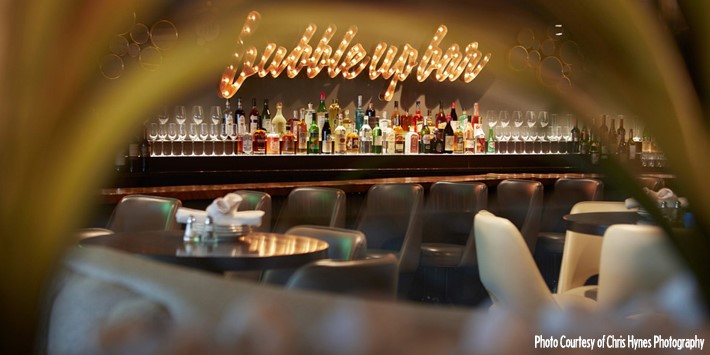 Next to the Trout River is a roomy dining room, three-season porch, bar and 14-foot-tall, double-sided fireplace in a red pine lodge that opened as a supper club and community space in 2014. Arrive by vehicle or boat. Meals introduce a southern flair to supper club expectations. For example: cornmeal batter for fish, coleslaw spiked with hot sauce. Expect the familiar and the unexpected, like pastas with Cajun/Creole seasonings, and coconut shrimp with sweet Thai chili sauce.

The name is what Joe Bartolotta’s mother called him when he was a boy and she meant business. Now he is co-owner of Bartolotta Restaurants, whose chefs include James Beard Award winners. Inside this supper club is a moose head above the fireplace, vintage photos of celebrities at supper clubs and classic fare prepared expertly. That includes Steak Diane, Veal Piccata, Chicken Marsala, Trout Almondine. One of the dessert options: Schaum Torte, with Chantilly cream as well as strawberries.

If the setting seems more like a big tavern serving three squares a day, take a close look at the menus, vibe and lingerers. Start with an Old Fashioned made with apple brandy, a brandy slush or Wisconsin craft beer. A Lazy Susan of nibbles – deviled eggs, small-town cheeses – induces pleasant flashbacks. So many entrees are pure supper club, done well, and the restaurant is wildly popular because of its obsession with Wisconsin products and food traditions.

“Where nostalgic meets now” is the motto, for good reason: You’re in for a mix of culinary favorites and innovation, as in classed up home cookin’. Supper, open since 2015, plays all the meaty hits but also takes vegetarian choices seriously; that might mean potato gnocchi or ravioli with a puree of seasonal veggies. For starters, it’s smoked trout mousse to black truffle deviled eggs. The art-deco setting feels both laid-back and chandelier-fancy, inside the former Shorecrest Hotel.

Stop in for an Old Fashioned cocktail that uses locally harvested maple syrup instead of an average sugar cube. It’s not the only key ingredient that comes from the rural neighborhood, which is Kettle Moraine State Forest. Add nice attention to details: pork chops with a cinnamon-apple glaze; slow-roasted duck with orange-brandy sauce; scallops with red-pepper aioli. Open since 2013, and owners take pride in the loyalty of their clientele. Check out the hitching post, for horseback riders.