This site uses cookies to provide you with the best onsite experience. Read our privacy policy to learn more.
Accept
Home > Things to Do > Fall Means World-Class Musky, Salmon Action in Wisconsin 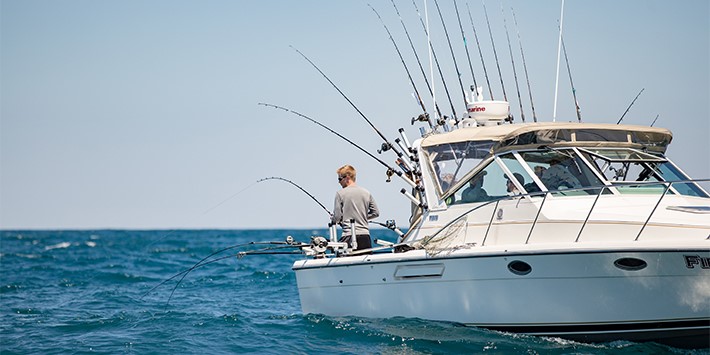 Thought you had to fly to Canada for big-time musky action, or head to the Pacific Northwest to catch bruiser Coho and Chinook?

Both angling experiences can be had in Wisconsin, and fall is the optimal time to do it. From September through November, these marquee game fish become highly active, moving in closer to shore and feeding voraciously prior to winter or to spawning. What's more, the reduced angling pressure during fall means that almost all species become easier to catch, regardless of their seasonal patterns.

The Wisconsin DNR's Bureau of Fisheries Management indicates that "Fall is a premier time for fishing." Even though it's a time when people tend to quit thinking about it - they put their boats away, kids are back in school and it's almost hunting season - But it is a great season for anglers. It's when the fish are hungrier and there aren't as many people going after them.

Musky Mania in the Northwoods

Make no doubt about it - fishing for Wisconsin's state fish, the muskellunge, reaches its peak in the autumn. Though they are active all summer, musky appetites grow when the water temperature dips below 60 degrees, typically in mid-to late September. As lake temperatures drop, these "freshwater barracudas" go on a feeding binge that lasts through November, fattening themselves up prior to winter on ciscoes, white suckers and yellow perch. It is during this season that the biggest fish of the year are typically caught, such as the 53-inch, 51-pound monster Tom Gelb pulled in November in Vilas County (one of the only 50+ pound muskies caught in the U.S. in recent years.) Fall is also when most major musky tournaments are held, including the annual Greater Wisconsin Muskie Tournament in St. Germain and the Sawyer County Fall Musky Tournament in Hayward (both in October.)

While live bait is fairly common, many musky hunters use artificial lures such as bucktails (in colors mimicking perch or cisco) or various jerkbaits - the bigger the better.  While musky waters can be found across Wisconsin, they are most plentiful in the Northwoods region, particularly Vilas and Oneida Counties; the greater Hayward area in Sawyer County; the Mercer area in Iron County; and the Spooner area in Washburn County.

Lake Michigan salmon fishing also reaches its peak during the fall season, though for different reasons. During fall, Chinook and Coho start to migrate in from miles offshore to spawn in tributary streams. Chinook are the first to arrive, typically spawning from mid-September into early October, while Coho and Brown trout begin spawning in early October and continue to end of that month. Generally thought of as deep-water fish that only owners of large boats can target, Lake Michigan salmon become accessible to virtually everyone during September and October and can easily be caught from shore, from piers or from shallower near-shore waters.

"Fall salmon fishing here is just unbelievable," said Brad Eggold of the Wisconsin DNR. "Though these fish aren't quite as large as coastal salmon, they're still big - with many in the 20-pound range. And, since their stream migration distance is limited by dams, they are concentrated into a smaller area than in other parts of the country, which translates into very high harvest rates."

Eggold cited a number of river and river mouth areas as fall salmon hotspots, including the Menomonee and Milwaukee Rivers in Milwaukee County; the Pike River in Kenosha County and the Root River in Racine County. Further to the north, the Sheboygan River in Sheboygan County, Manitowoc River in Manitowoc County, the Kewaunee River in Kewaunee County, and the Menominee River in Marinette County also attract widespread attention from anglers.

While salmon anglers use a variety of lures and presentations, yarn flies seem to be popular with wading or shore fishermen (in the steams) while dodger fly rigs and J-plugs are used by fishermen on the lake. Both resident and non-residents are free to try both techniques by virtue of the two-day trout/salmon stamp (sport license) offered by the Wisconsin DNR. Prospective anglers are encouraged to visit the DNR website for more information.

Other Fall Species to Target in Wisconsin

While musky, Chinook and Coho take most of the limelight during the fall fishing season, several other species are also worth putting on your "fish-for" list. In Lake Michigan, Steelhead and Brown trout also have seasonal spawning patterns and offer opportunities similar to Coho and Chinook. Lake trout are another popular species, as they continue to be very active during fall and make for a delicious feast (not to mention exciting angling!)

On the inland lakes, walleye are a popular fall target. According to Wisconsin DNR creel surveys, walleye catch rates are highest during the fall. What's more, they become much easier to find - as weeds die back and the water temperature cools, they tend to migrate to shallower waters, particularly at twilight. Working crank baits in the cooler waters near edges and rocky shorelines is often productive during the fall season, as are larger minnows. While walleye can be found throughout Wisconsin, the Lake Winnebago system and northern lakes such as Lac du Flambeau and the Chippewa Flowage are particularly well-known for fall walleye fishing.

Check out more great fishing spots, tips and articles in our TravelWisconsin.com directory.