This site uses cookies to provide you with the best onsite experience. Read our privacy policy to learn more.
Accept
Home > Things to Do > Arts and Culture > Architecture > Lincoln-Tallman House

The Rock County Historical Society is a resource for historical research, thought-provoking programming, and one-of-a-kind historic sites. At its center is the Lincoln-Tallman House, an Italianate-style mansion that was constructed between 1855 and 1857 and occupied by William Morrison Tallman, a lawyer and abolitionist. Abraham Lincoln visited in October of 1859 prior to his election in 1860. The house contains over 75% original furnishings and depicts upper class life during the mid to late 1800s. Meticulous attention to detail is evident in each of the 26 rooms on five levels from the basement to the cupola. 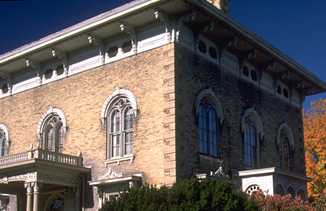