This site uses cookies to provide you with the best onsite experience. Read our privacy policy to learn more.
Accept
Home > Things to Do > Arts and Culture > History & Heritage > 7 Man-Made Wonders of Northwest Wisconsin 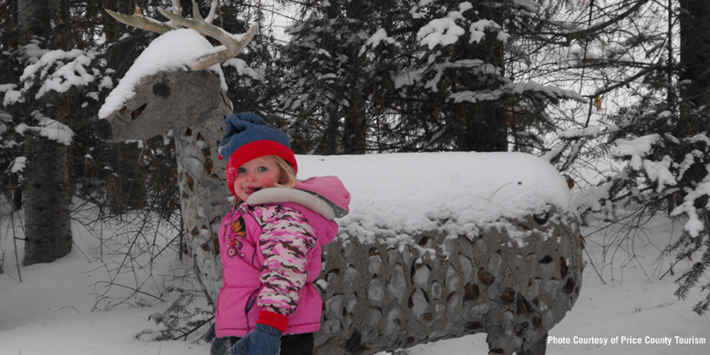 Man-made wonders come in all shapes and sizes. They are those inspiring destinations that are few and far between and showcase everything from stunning architecture to modern sculptures to historical artifacts to quirky one-of-a-kind destinations.

While every region has far more man-made wonders than can be mentioned in one article, here is a handful open year-round for you to check out during your next visit to northwest Wisconsin.

This grand landmark features a four-story turret overlooking the bay of Lake Superior. Originally built as the private home for one of Superior’s first mayors and his family, Fairlawn Mansion was completed in 1891 and has 42 rooms.

Now a museum, the first floor has been fully restored and features the grandeur and elegance of the original owner’s wealth. In 1918, the home was donated to the Superior Children’s Home & Refuge Association and served as an orphanage until the 1960s. The third floor of the museum is dedicated to the era the building was a home to the less fortunate.

Visit this magnificent Queen Anne Victorian structure to walk the halls and learn the stories and history behind a man-made wonder that was once home to both the city’s wealthiest and poorest residents.

Recognized as one of America’s most unique displays of folk art, the Wisconsin Concrete Park contains sculptures designed and created by Fred Smith, a lumberjack, tavern owner, farmer, and dance hall musician who in his 60s added the title of artist to his repertoire.

Grouped together on 3.5 acres, Smith’s sculptures are located in a public park just south of Phillips and are available to explore year-round.

Located within an eight-block business district in historic downtown are 13 giant murals depicting the city’s founders, lumberjacks, military veterans, railroad workers, storefronts and everyday life. While many are painted on the sides of buildings, there are a handful of murals in indoor public spaces.

In addition to the downtown murals, there are two located a few miles west. The first mural was finished in 1998, and since then they have colored the downtown, becoming the Historic Mural Capital of Wisconsin. Take the walking tour this winter to explore the city’s history in a creative and larger-than-life format.

Where does one find the World’s Largest Talking Loon? In the Loon Capital of the World, of course!

Weighing approximately 2,000 pounds, this 16-foot-tall statue is named Claire d’Loon and includes buttons to hear various loon calls. Constructed in 1981, this man-made wonder is a landmark for the community and provides educational information about the loon population in the area.

This man-made wonder dates back to 1889 and is the oldest destination on this list. Considered a premier example of a restored vintage American theater, this elegant building contains intricate hand-stenciling, hand-carved white pine archways, awe-inspiring woodwork, brass fixtures and leaded glass windows.

One of the highlights of the lavish Victorian theater is the rare pipe organ, which contains 1,597 pipes and 28 stops. See a show in this ornate wonder or pre-arrange a tour of this opulent crown jewel of historic theaters.

While-cheese making is not unique to Wisconsin (since we make more than 600 different varieties), a 200-dairy, farmer-owned cooperative that was founded more than 100 years ago is!

What better way to celebrate Wisconsin’s dairy heritage than by visiting the Burnett Dairy Cooperative located a few miles outside of Grantsburg? Founded in 1896, it's one of the few remaining full-service cooperatives producing cheese today.

While their retail cheese products are sold online and throughout Midwest stores, there is something to be said about heading to Burnett County to the Cheese Store & Bistro located on site and open daily. You can browse more than 100 varieties of cheeses and try samples before you buy.

Just like cheese, beer in and of itself is not unique to Wisconsin; however, the heritage and history behind Leinenkugel’s is a wonder worth visiting. It is the nation’s seventh-oldest operating brewery.

Founded in Chippewa Falls in 1867 to cater to thirsty lumberjacks, the company has been in the Leinenkugel family for six generations and continues to thrive to this day. Head to the Leinie Lodge for a tour and learn about nearly 150 years of beer brewing in Wisconsin.