This site uses cookies to provide you with the best onsite experience. Read our privacy policy to learn more.
Accept
Home > Things to Do > Door County Lighthouse Tours 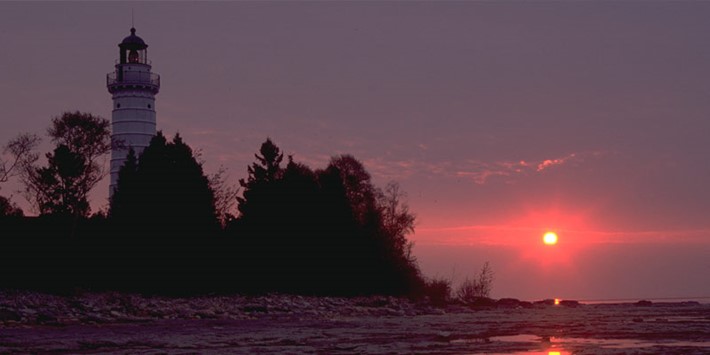 Baileys Harbor Range Lights are located in Baileys Harbor and was built in 1869. This lighthouse is accessible year round and offers self-guided tours outside.

Cana Island Lighthouse is located four miles northeast of Baileys Harbor, halfway between North Bay and Moonlight Bay. Built in 1869, the lighthouse stands 89 feet tall and still has an operating light. The lighthouse is listed on National Register of Historic Places. The grounds are open and guided tours are available from May through October.

Located near Fish Creek, Chambers Island Lighthouse was built in 1888 and has been a 40-acre day park since 1976. The lighthouse is open to the public for tours when the caretaker is present. The caretaker's office is now a museum of island and Wisconsin lighthouse history.

Pottawatomie Lighthouse is located on the north end of Rock Island State Park. The light was established in 1836, rebuilt in 1858 and automated in 1956. It stands 41 feet tall. The original lantern was removed from the tower in the 1980s and a steel skeleton tower was built near the lighthouse that now holds the navigational aide light. In 1999, a replica lantern room was rebuilt on top of the lighthouse and a replica 4th Order Fresnal lens has also since been installed. The grounds are always open and tours inside the lighthouse and even up into the lantern room are available from Memorial Day weekend to Columbus Day weekend. Rock Island is only accessible by boat. The Rock Island Ferry “Karfi” makes regular trips from Washington Island.

The following Door County Lighthouses are not open to the public.

Pilot Island Lighthouse marks the strait between Washington Island and the northern tip of the Door County peninsula and is located in the Death’s Door water passage near Washington Island. It was built in 1858, automated in 1962, and is still an active aide to navigation. This Wisconsin lighthouse and grounds are currently closed to public but can be viewed from shore at the Northport Ferry Dock (northern end of Hwy 42). Visitors aboard the Washington Island Ferry and Island Clipper can get a little closer look at the 3.5-acre island and lighthouse during the trip to Washington Island. For an up-close look, Shoreline Charters operates a boat tour out of Gills Rock that goes past the lighthouse for viewing and photography from mid-May to mid-October.

Sherwood Point Lighthouse is located at the bayside entrance to Sturgeon Bay and is perched atop a bluff on Sherwood Point. It was built in 1883 and automated 100 years later in 1983, making it the last lighthouse to be automated on the Great Lakes. The lighthouse, which is still an active aide to navigation, and grounds are closed to the public, but the lighthouse can be seen from across the water at Olde Stone Quarry County Park and several boat tours operating out of Sturgeon Bay take visitors up close for viewing and photography from mid-May to mid-October.

One of two Wisconsin lighthouses that mark the entrance to the Sturgeon Bay ship canal on Lake Michigan, the tall white Sturgeon Bay Canal Station Lighthouse was built in 1899, automated in 1972, and remains an active aide to navigation. This lighthouse is located on the grounds of an active US Coast Guard Station. While the lighthouse and grounds are not open to the public for tours, visitors may park in designated parking areas and are permitted to walk along the paved driveway past this lighthouse to the adjacent pier, which leads out to the red colored North Pierhead Light. Additionally, several boat tours operating out of Sturgeon Bay take visitors up close for a water-side view of this lighthouse from mid-May to mid-October.

The other lighthouse that marks the entrance to the Sturgeon Bay ship canal on Lake Michigan is the red colored North Pierhead Light. It was built at the end of a long breakwater pier in 1881 and remains an active aide to navigation. The lighthouse structure is not open to the public for tours, but visitors are permitted on the long pier that leads out to this light. A great spot for photography and fishing, the pier offers visitors scenic views of both lighthouses at this location and also provides sights of a variety of boats big and small headed into the Sturgeon Bay ship canal. Additionally, several boat tours operating out of Sturgeon Bay take visitors up close for a water-side view of this lighthouse from mid-May to mid-October.

This entry was posted in Things to DoOutdoorsTours 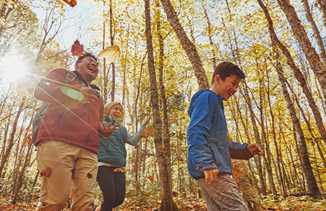